The following alludes to a scene from the moving film “Wish I Was Here” written and directed by Zach Braff. When you read the name Ian Buckwalter, please read it as Cloris Leachman snarled, “Frau Blucher” in “Young Frankenstein” with a subsequent horse neigh:Cloris Leachman

If ever I was in a grocery store and saw IAN BUCKWALTER, I would have no problem approaching him, even though he works for one of my favorite news venues (NPR). Seeing IAN BUCKWALTER’s shopping basket laden with limburger cheese, I would be sure to tell him that saltines were in order, since they haven’t any taste, just like his review of your poignant film. If IAN BUCKWALTER consequently punched me, which doesn’t seem a very NPR-ish action to take, I would wear my shiner with pride.

IAN BUCKWALTER’s take that your philosophical scope is no larger than a fortune cookie slip leads me to believe that Chinese restaurants now offer impactful family advice. A fact which gives me trepidation since my Masters in Counseling could be obsolete.

May you write many more cinematic fortunes,

Seriously folks (and IAN BUCKWALTER:), “Wish I Was Here” was gorgeous, both in its sentiment and cinematography. I gambled the risky proposition of suggesting it as an outing with my mother and sted-dad, both in their 70’s, and they, too, were moved.

In my last post about Philip Seymour Hoffman I mentioned honoring people’s memories. “Wish I Was Here” touches on this issue as well, the importance of oral history in your family’s discourse. Make it a point to ask a question to your parents about their upbringing today (if you’re lucky enough to still have them) OR tell your kids about sage advice or a cool hobby your parent taught you. I’m calling my 91 year old grandma as soon as I post to ask her about her memories of childbirth since today is my dad’s 72nd birthday.
As James Taylor sings, “Honor the people you love with love, show them the way you feel!” And go see “Wish I Was Here”!

Living in Rochester, New York grants me the privilege of seeing Philip Seymour Hoffman movies on the big screen once a week for the next few months at the grand Dryden Theater (George Eastman House). And since one of his last movies “The Most Wanted Man” opened at the independent Little Theater on Friday 7/25/14, I gladly took in a double header of PSH films.

Listening to the podcast “On Being” this morning afforded me the musings of an artist by the name of Dario Robleto, “Sculptor of Memory”. Mr. Robleto spoke of how art is our way of keeping deceased family and friends in our memory. Watching the films “State and Main” and “The Most Wanted Man” is an obvious way of memorializing.

Having met PSH very briefly during his visit to the Little for the opening of Flawless doesn’t in any way make me a friend, but being of his generation and having lost a friend to addiction in 2000, keeps me rooted in this loss, in a good way, a way of keeping memories alive.

“State and Main” from 2000 showed that as in Boogie Nights, PSH can deliver poignant vulnerability. I had not seen the film before last Wednesday and was struck by Mamet’s renowned razor sharp dialogue, William H. Macy being the antagonistic foil to PSH’s sweetness. The only thing negative about the film was the cheesey music that curdled in the background of the budding romance scenes between PSH and Mamet’s real life wife, Amy Pidgeon.

I feared going to see “The Most Wanted Man” after spending a miserable couple of hours at the adorable Burns Court Theater in Sarasota Fla watching “Tinker Tailor Soldier Spy”, another John Le Carre novel-turned movie, but hooray for Andrew Bovell, a far better screenwriter!

Instead of the flat terrain of “TTSS”, The Most Wanted Man at least provided an incline to a climactic finish. PSH was never better as a depressed failure of espionage yet a character who still had enough punch to duel with the always fantastic, but in need of a new hair-do, Robin Wright.

And while it may sound shallow to comment on a woman’s hair, I do so, only because of what I discovered in my own life. I found that getting my hair chopped off was one of my tendencies toward self-loathing, along with an ultra strict diet, both of which I am proud to say I moved on from in my more self-confident middle age. Perhaps RW’s hair is a positive choice for her, I’m simply commenting on the sadness in her eyes, maybe more than the characters she portrays. Chalk it up to my Masters in Counseling observation skills.

Certainly seeing a sad over weight PSH mad me sad, but simultaneously I benefited from the beauty of one his last do-not-go-gentle-into-that-good-night performances.
In addition here’s to my friend Mary whose red headed Irish temperament also hung on to her bitter end. To remembering!

I saw Words and Pictures two weeks ago at the super quaint Cinema Theater on Clinton Avenue in Rochester, New York where pet therapy (the theater cat) is free with admission. Usually I am chomping at the proverbial cat nip to write about a film, and it wasn’t that the film was bad that kept me mum till now, but two other factors instead.

For one the film hits a little too close to home. Meaning, as an English teacher of 28 and a half years, I am always longing for, and uber excited when, new teachers are hired by my district. Let’s face it, we (teachers) live a cloistered life, not only in an our individual islands of classrooms, but in our precious microcosmic world which follows us home weeknights nine months out of the year.

So yes, I was envious that a Clive Owen character could be a swaggering English teacher in any world and that he would fall for a plainly adorable rheumatoid arthritis victim such as Juliette Binoche. Don’t the Clive types really always go for the perky first year teacher whose wide eyed enthusiasm wakes him from his jaded mediocrity? Didn’t I even ask my friend when she was fixing me up with such back in ’99 (goodness I’m old) that didn’t really good looking men equal trouble?

Anyway, the movie was satisfactory, despite poor reviews on Rotten Tomatoes 42 critic, 58 audience. My rating would be more of a 75, so in teacher talk, it’s not quite mastery level. The main problems were: the students were much too two dimensional and their subplot angst was not well acted. The other issue was Juliet Binoche was just too demanding and surly to be worthy of a man chasing after her. The most cringe worthy scenes were: one, after their first love making session (not shown by the way) which Juliette’s character prefaced by saying she wasn’t sure she could operate her sex life dormant for years, post-coitus suddenly becomes insatiable nympho. Second was the cheesey wine drinking to a love song scene, where they almost feed each other grapes. Holy cliché.

My second reason for not diving into blogging about the film is that, my readership has not exactly been growing. Yes, I need to change my domain name to something easier for people to type. Yes, I need to consult my notes from my meeting with the successful blogger Jennifer Blanchard and do the items instructed. My excuse for that procrastination is that I met with her at the end of the school year, on a school night, hence refer back to my alluding to the teacher mind as mush during nine months of the year.

So, I have some home (blog) improvement to do, but as my homemade business card holder* 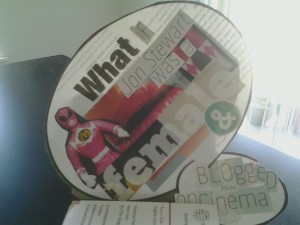 instructed, it took 90 plus minutes to watch a World Cup game and only 5 or 6 to invest in my blog, so why not?

Spread the word and make a comment! Thanks for reading!

Much like that chair ump with an obvious stygmatism from the late 70’s are Rotten Tomatoes reviewers(94%) and David Denby of The New Yorker. You can not be serious! Snowpiercer was horrid story telling, due to either the original book being flawed or the screenplay and editing askew, and I’m not about to try to find out. I’m just relieved I escaped with a few laughs from Tilda Swinton’s magical near cameo-esque performance and the ascetic beauty of Chris Evans’ face while I stifled a laugh at his ridiculous dialogue (paraphrasing here, but something to the effect of “I started hating myself for liking the taste of babies.”) Holy Jonathan Swift! See? I cannot even finish a compliment without being stymied by a stupid moment in this film.

This plot had more holes than my fishnet stockings. Like how were the Korean father daughter team huffing the noxious drug yet still able to snap to whenever ‘danger’ came their way?

In addition, the gratuitous violence was more than one needs in a life time. I have to hand it to Bong-Joon-ho though, even he must have grown weary of your basic man on man violence. In subsequent scenes he added twists like power outage train tunnel fighting lit with an infrared type lighting and slow motion sequences where the sounds of hitting and grunting finally came to an end, proving that even the protagonist was numbed by the sheer banality.

I’ll finish on a positive, the movie’s super antagonist, played by Ed Harris has a great line near the film’s end to Chris Evans, “You’re so tense. When’s the last time you got laid?” Now THAT would have been a much better film!