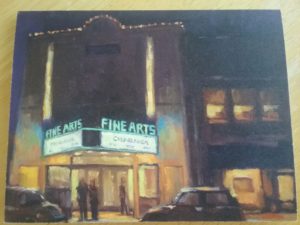 First, let me say you should have been nominated for best screenplay, director AND actor for The Way. You’ll always have a soft spot in my heart for that poignant father son film. On the lighter side, I enjoyed your work in The Stakeout, as sweet as the Bubble Yum gum I devoured in my youth.

Now, dodging rain drops in Asheville, North Carolina, I gladly took in your newest film The Public. I mean, you’re such a humble man with good intentions and the homeless using public libraries must be an issue in many cities, my hometown of Sarasota (shout out to the Selby Library!) included. And due to the aforementioned films, I had high hopes especially with two of my other favorite actors also in the film; Alec Baldwin and Christian Slater.

But boy, did I wish wish wish after the fact that I could have been a script doctor or more apt, let me shelve alphabetically what character contradictions I would have excised:

A for Alec; how can a person specializing in conflict resolution then lead a charge of storm troopers?
C for Christian Slater: he goes from prosecutor/bully to acting with the authority of chief of police? Christian threw his weight around more than a WWE Wrestler. He also sued on behalf of a homeless man’s rights being denied at the library (who paid for his service?) yet called them bums and basically wanted them taken down in the coup so that he could go watch The Tonight Show? Did we go back in time to the Johnny Carson days when The Tonight Show was a one time event? Now you can watch clips in any cab in NYC days later.
D is for dialogue: much too snappy and choreographed…there were times when I was waiting for this to be a musical and then sure enough, it became one! A mixture of Hair and The Full Monty!
E for Emilio Estevez: your character defended the privacy of the public within the library, but you were pumping (see Groucho Marx and his wiggling cigar say, “in more ways than one”) your cute Apartment manager for the dirt on other tenants?
G for girlfriend: her mood swings were bigger than Mariah Carey’s; one minute she’s supportive the next she’s lecturing, wait, that’s actually realistic of most women…add that to the positives…

Segue…for the positives: the movie held my suspense, I really didn’t know where it was going, sort of like what it must feel like to lose your brakes on Lombard Street.
I did believe the chemistry between you and the Apartment Manager. I did believe some of the homeless people and the crazy antics that must happen in libraries every day. I also appreciated your attempt to see the rift between the haves and the have nots.

Your resolution, while Hollywood in bright lights was cute, and Emilio, so are you! And see me for future script help, I’ll work for peanuts (make that almonds, I need calcium:)

Yours Respectfully and Truly,

Aspiring writer who has retired from the institution of education. I've written plays, three of which have been performed both in Rochester NY and here in Sarasota FL. I also write stand up and obviously, film critique. My comment section does not work, so please email me your comments at irun2eatpizza@hotmail.com

View all of Goldie's posts.