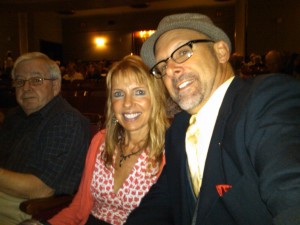 Having been quite jealous when my little brother ‘showed up’ when I was just 3, I was fascinated with the documentary “Mistaken for Strangers” about The National’s lead singer Matt Berninger and his younger un-leaded brother Tom. (Aside, I love my brother to death, see photo of us as concert chums for Paul Simon and Sting 3/14, and if anything, much of our younger day rivalry was adult driven.)

This film’s a definite must-see for anyone who feels like the lesser sibling, anyone who wants to make it big with the band (The National had to start from scratch like most bands and Matt tells a touching story of being booked at The Mercury Lounge in the early days and NOBODY showed-ouch), and anyone who feels passionate creativity, but never quite seems to make it.

The footage of different cities is minimal (though Ben Stiller seems to have a clone miming on the streets of London), but that’s ok, it’s about family dynamics first and foremost.

Other classic scenes involved Matt giving the cliched, “think of this as an opportunity for growth”‘ speech and laughing at Tom’s confession of frustration tears.  Success can breed apathy, no doubt.  You’ve heard of sore losers (which Tom is definitely NOT), yet Matt can come off as a sore winner.

And don’t get me wrong, I’m a back door fan of The National, proudly first hearing of them in the soundtrack for Starbuck (a French film, see previous review) and then seeing a mesmerizingly sexy performance of them on SNL.  But my lust waned after seeing this film, mainly because although Tom is definitely 50% to blame for self-sabotaging, his patronizing family, cocky tour managers, and apathetic record store owners are certainly no Swiss picnic, nor confidence boosters.